After a week camping on the wonderful island of Bear Island, I am now back i civilization. Working mostly 15hr days, trying to solve the mystery of the great skua, I was looking forward to a few relaxing days working on the computer. But things want it differently. Since I arrived Spitsbergen (another Arctic island) I’ve been busy running around preparing for the one month long expedition I am leading on the east coast of the archipelago. Its probably one of the most remote places in Europe, so its important that everything is in shape. On top of this, I am also putting up a nice exhibition about the Arctic wildlife called ”Polar Moments”. It has allready been up for a month in my home town, and there I got really good backfeed on it, so I am a little bit excited to see how the true Arctic people judge these images. In other words not much time for photography, so I leave you with a few images from my work on Bear Island. 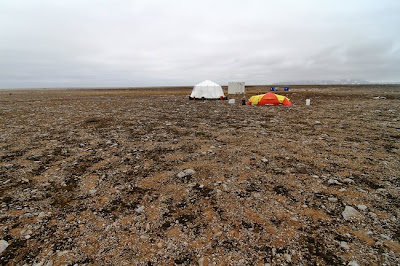 Our camp. It doesn't look like much, but its one of the best places I have ever been. 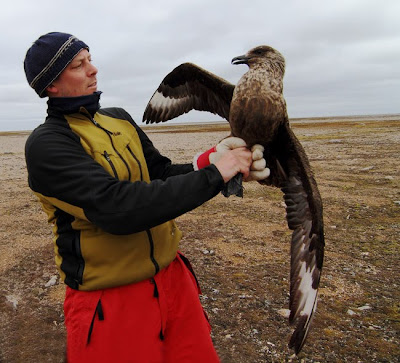 Myself negotiating with a GREAT skua - at the end we agreed to let him fly. Photo: Hálfdán H. Helgarson

In a few hours I leave for my 7th summer in the Arctic. I am off for a nice start to a very remote and beutiful island - Bear island. Nine people live here as part of a weather station. The weather station change crew every six months, and for the rest of year they barely see any people.

Well, I  am not going there to see the people either, but to do fieldwork on seabirds as part of a team employed by the Norwegian Polar Institute. I will be busy, teaching new people the methodology and catching great skuas. Hopefully I get the chance to do some photography inbetween all the work. People often think I am going on holiday when I'm off for fieldwork. Even though I get to see many interesting places, its often hard work with 12-18 hrs working days in all sorts of weather and usually seven days a week.

Anyway, the nature experienses I get during my fieldbiology jobs is worth the effort. Going to remote places also means no phones or email for some time - which itself is making going to these places worth it. 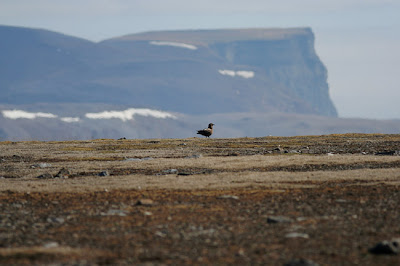 The island and the great skua. In July, the average is 27,5 days with fog, so this view is actually pretty rare on Bjørnøya. Because of all the days with bad weather, you learn to appreciate the good days even more.....
Lagt inn av Eirik Grønningsæter / WildNature.no kl. 14:57 1 comment:

I live in Norway’s 5th largest town, Trondheim. I live just three minutes walk from the town square, where most people don’t think its possible to experience any wildlife at all - except for the few seagulls and city pigeons that roam the area in hope of getting a piece of anthropogenic left overs of course. I think, and I know, differently. Every evening I have a river otter swimming past by my garden, I have a badger that often play in the garden and just the other day, there were also two young moose strolling around in the neighbourhood. Most people never notice all these animals, but when they do – its always a cry out in the local newspapers that there is too many of them, they don’t behave normally beeing so close to humans, they can be dangerous to people etc etc……


The two young moose, recently been pushed away from their mother (as is common this time of the year), was out exploring life on their own and trying to get a grip on what to do and not to do in this world. Testing boundaries - normal youth behaviour I would say. Of course, many people thought it was interesting to have such large animals walking around in the neighbourhood. Our, as usual, trigger happy wildlife management authorities thought differently - and killed them! Afterwards, they said that it was not possible to sedate them and move them back into the forest as they then only would return back to the city. Well, they never tried – so we will never know, will we? For the best for the animals they said. Hmm….maybe its just me beeing stupid, but how do we actually help healthy animals by killing them?

I am quite surprised of many people’s low acceptance for nature, and their likewise high acceptance for playing God and to decide who is going to live and not. What makes it worse, is that the decisions are often based on a complete lack of knowledge of animal behaviour and biology. In Norway, we have a strong tradition for hunting, sadly this seems to be the only method that our nature management employees think its possible to use for ”managing” nature….by shooting and killing. Don’t get me wrong, I am all for hunting and eating meat and utilise nature resources. In fact – I think its much better ethically to eat meat from a hunted wild animal, than meat from a cow or pork that has all its life lived innside in a space not big enough to turn yourself around...But I am quite astonished by the low acceptance to actually enjoy wildlife and nature alive in this country. Norwegians like to think of themselves as a nature loving people. However, to me it seems that most people are only interested in the scenery, and not really the creatures that lives in the fjord, in the forest or up on our beautiful mountains – the things that actually makes nature beeing nature.

I’ve been participating in radiotracking both wolves and lynx from time to time, and most people would probably be amazed of how close to people these animals like to live. In case you didn’t know – these animals are in fact rarely out in the wilderness. I have tracked wolves lying virtually in the garden to people’s houses, and lynx hunting domestic cats in the suburbs of Norway’s capital – Oslo. Next time you see a deer in the garden, a fox chasing some birds in a field nearby – don’t immediately think of the animal as sick, injured or a result of beeing too many – don’t run for your rifle, but rather take your time to enjoy nature’s way of adapting to a world which get more densely populated by humans as every minute goes by. It’s all natural behaviour!! 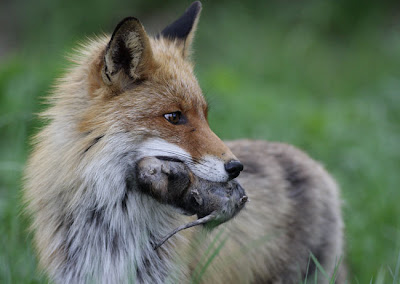 I met this fox during rush hour in the biggest city of  Norway. For some animals, an urban area might be as good habitat as any other territory far out in the wilderness.
-EG-
Lagt inn av Eirik Grønningsæter / WildNature.no kl. 16:52 2 comments: