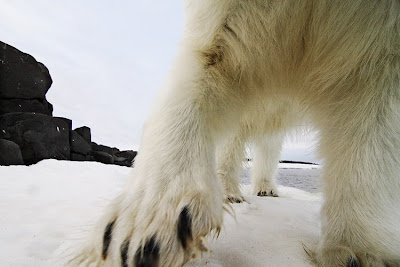 I am both flattered, humble and of course proud, to announce that my image of a polar bear taken last year has been awarded the winner of the Veolia Environnement Wildlife Photographer of the year, Animal portrait category 2010!

This competition is considered to be  the most prestigeous of all nature photo competitions. This year, there were a stunning 31 000 entries from more than 80 different countries! As many times before, I was on an seabird expedition for the Norwegian Polar Institute when this bear approached. We retreated into our zodiac, to not risk any unfortunate incidents before we started to photograph this very curious bear. When taking picture of nature, safety for the animal or bird I am working with is always of first priority!

I am also very pleased to see that there were images from no less than three other Norwegian photographers at the exhibtion. Tom Schandy, Roy Mangersnes and Orsolya Haarberg all achieved honorable mention in this very prestigeous competition. This shows that Norwegian nature photography are really at the high end amongst the world's nature photography buisness.

The exhibition with all the winning and highly commended images will now tour the world, and is expected to have more than one million visitors world wide before the end of next year.

After two weeks on my prime local birding spot, not a single new bird was seen. Nice observaitons of Greater short-toed lark (dverglerke), Citrine wagtail (sitronerle) and numerous rather confusing varieties of Arctic redpolls made the hopes stay high for the whole period, but we all felt like the star was missing. I tried to make a star of myself when I was interviewed by the Norwegian Broadcasting Radio (NRK) in a 2hr show about nature, but that was about it of fun events on the magical island. Hard work in the field despite, no big rarities wanted to pay us a visit this year.

It wasn't until I arrived back home that the nice message turned up on my cell phone - Stilt sandpiper! Only a short drive away, and what a bird! A long wanted "lifer", and he was a real crowd pleaser. For once, a bird that was cooperative, and the ever increasing crowd of happy birders could enjoy the spectacular bird until few meters distance. The Stilt sandpiper (styltesnipe), is only previously recorded two times in Norway with the last one all the way back in 1993. It breeds in subarctic and Arctic North America, and if they don't get lost on their way south like this one - they should spend the winter in Central- and South America.

This morning, some friends and I went out for an early morning photo shoot of the very welcome celebrity. 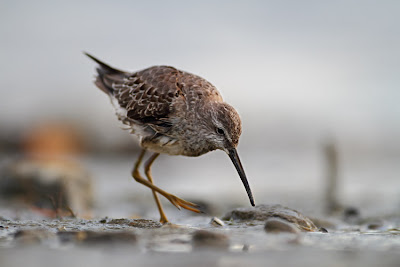 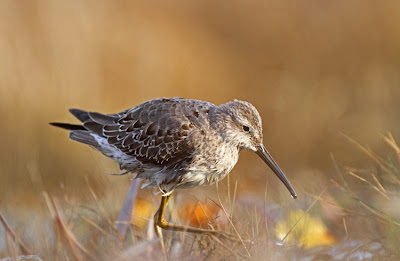 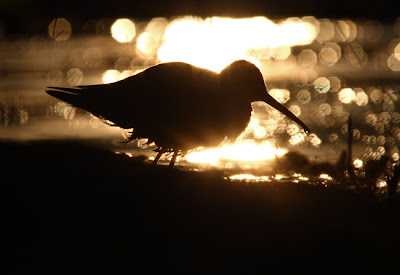 A big thank you goes to the local birder Per Inge Værnesbranden for passing on the message of this extraordinary recording, and let the rest of Norway's bird community take part in the nice experience.
Now I'm off to London to take part in a big nature photo award ceremony I was invited to join. More on that later.