I have finally found some time to sit in front of my computer. It is something I try to avoid as much as possible – but unfortunately a very important and big part of a wildlife photographer’s job. During the last two weeks, I have edited most of my images I’ve taken this year and I have now about 800 or so fresh images ready for my agents to sell.


What is nice about the editing process is that one gets a chance to re-live the many amazing experiences I have had while taking the images. One of my strongest and best wildlife encounters this year involves a short-eared owl. Last year was a very good rodent year, meaning many owls and raptors had a good breeding success in the Scandinavian forest and mountains. This year however, as expected, the rodent population had crashed completely. When last year’s young owls returned to the places they were born to try to start breeding themselves, they only found areas where food was very scarce. Many of the owls were very hungry, and needed to search for food elsewhere. Many short-eared owls were hunting during daytime and stayed in the low land was a good evidence of their food shortage.
In end of May, I was searching for short-eared owls to photograph in one of my local patches. I was pleased to find one hunting over a nearby field, but before I arrived to a good position the owl disappeared out of sight and perched in a ditch. I placed myself about a 100m away, and since there was no one else around I risked making a fool of myself and started to make squeaking noises with my lips. I was hoping my strange way of communicating would attract some attention, but never imagined what happened next. A few seconds after I started making the noise, the owl lifted from the ditch and came straight towards me. As I was looking through my camera, the owl just started to fill the viewfinder more and more. I couldn’t focus properly, and I realised the owl was not to turn around. It then landed on my 70-300mm lens while I was holding it – only about 30cm from my nose!  Not easy to photograph birds when they sit on top of the lens. It sat for a few seconds while we were staring into each other eyes before the apparently very hungry owl flew off. I have never communicated so well with an owl ever before! A true moment to remember and experiences like this is the very reason why I love being a wildlife photographer! 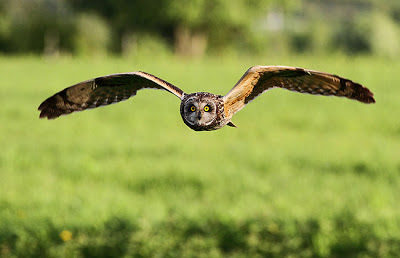 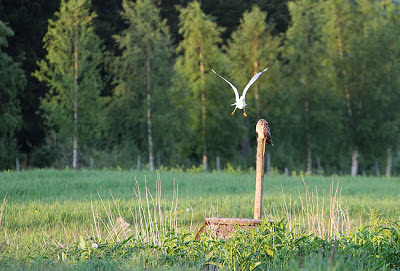 Not everyone is as pleased as me to see a short-eared owl.. 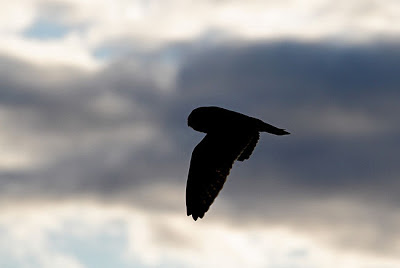