On the Saturday web-edition of the national newspaper Klar Tale, there is an interview with me and some images of my work. I have already had a feature in the paper edition this week. Check out the 27 Nov issue of klartale.no. The article can be seen here (Unfortunately in Norwegian only).

I am now on my way for a 2 months photo expedition to Africa - not sure how much internet is available but will try to keep the blog updated whenever possible.

The Red List – a powerful tool or just an illusion?

Last week, a new list about species considered to be at high risk of extinction was presented by Norwegian nature management authorities. This Red List has been compiled by different specialist groups put together to assess the different risks of extinction for the Norwegian fauna. The previous Red List was made in 2006, but our Government wanted an updated version already now – only 4 years later. Four years is not a long time in nature time, but surprisingly many changes have been made in the new edition.


The Red List is ment as a tool to facilitate nature management. Areas with many red listed species at high risk of extinction will get a stricter protection than areas without. Here is my problem. Norway has been, and even if slightly improved the last decade, still is for the larger part hugely neglecting nature. Consequences are that Norway is one of the worst countries in Europe when it comes to take care of, and produce knowledge about our nature. If it can’t be hunted or fished, Norwegians doesn’t seem to care too much about it. 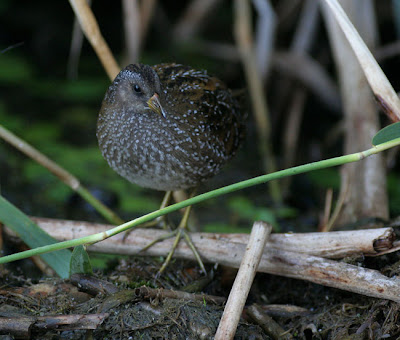 The seldom seen Spotted crake (myrrikse) is listed as Endangered, which means more than 20% chance of extinction within five generations. That is the same status as in the 2006 edition. Eight bird species are listed in this category.

The result of this is that, with the exception of a few huntable species and easy monitored species like our seabirds, we don’t have a clue about population trends, risks or even distribution for many of the species assessed. Even so, instead of being honest and say that there is data deficiency, many species have been moved down on the risk assessment status and some even kicked out all together of the new edtion since the 2006 version. Some of the changes are made because of differences in the way of assessing a species in Red List standards, more than actually biological changes in nature. Even so, reading the authors’ argumentation for ranking a specific species, you will soon see that most of the changes are just made mostly from subjective criteria by the expert groups. However, for most of the species assessed, there are no new knowledge today compared with the 2006 version. My main concern lies with the degraded status of many species, even if the actual knowledge about them is status quo. Based on the fact that areas with Red Listed species of a high risk of extinction are much easier to protect than habitat or areas with no such species, wouldn’t it be vice to act from a cautious angle and assume the worst instead of the best as long as there is very little knowledge anyway?


In my opinion, the new edition of the Red List has unfortunately made it much easier to destroy valuable nature in Norway than it was just two weeks ago.

As sad as it is, I am afraid that the new Red List will be used as a tool and ”fact sheet” for our bureaucrats to assess important nature areas and give them precise validation. When reality is that it is an illusion, and the actual knowledge about the species assessed is still as non-exsistent today as it was in 2006. The result will be that Norway’s many important nature areas soon will be gone – and so will the species living within them. This is a new species on the Red List since 2006, and Black red-start (svartrødstjert) is now listed as Vulnerable which means 10 % chance of extinction within a hundred years. 23 bird species are listed in this category.

The Red List can be downloaded for free at this adress:  www.Artsdatabanken.no , The list is both in Norwegian and English.