Another brick in the wall!

A bit personal this time – if I may…Since four years ago, I decided to try to be a fulltime wildlife photographer. A bold and risky thing to do you might say.  Most of the people I meet think it is virtually impossible to make a living from it, and some of them even discourage me to go further with the idea.

I have always had a reputation of being stubborn, and I always have felt an urge to do things my own way. This might not always be a good thing, but through the years it has certainly helped me to gain self confidence as the number of victories increased. Growing up with a huge fascination for nature, and birds in particular, I’ve spent countless days outside and this has slowly shaped me as a person. Money has never taken a big part of my mind. Being able to have the freedom to go where I want, whenever I want  and at the same time do what makes me smile every single day is worth more than what any money can buy.
However, I will be the first to admit that taking a career move into wildlife photography is not an easy thing to do. When I did the step, I knew it would take many years to build up the business. I needed to build it piece by piece and brick by brick, and work hard every single day to achieve my dream. Every time an article or one of my images is published in a magazine, it is a small victory helping me to believe in my dream. Last year (2010), I had my first exhibition and won a first prize in the world’s most prestigeous photography competition (Veolia WPY). This year has kicked off with my very first National Geographic article (Nordic version, 2/2011). A magazine that only a few years ago seemed impossible to have on the client list. To be published in it, only excisted in the deepest dreams of mine. National Geographic is arguably the most prestigeous magazine to be published in among nature photographers. I am happy to see that my business seems to improve every year.
I still have some distance to cover before I can call myself a full time wildlife photographer. But I have always believed that if one wants anything strong enough, one will achieve it in the end as long as you work hard for it and keep focused. At the moment, I live in a mixture of being a photographer and a fieldbiologist who designs and runs field studies for scientists. I will continue to build my business brick by brick, and the National Geographic article which is on sale now, I consider to be an especially important brick in my wall. To be a full time wildlife photographer is still my dream, and I’ve always believed that dreams are there to be realized - isn’t it?

Online version of the National Geographic article can be read here 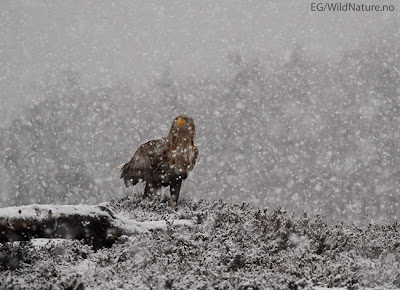 This "snowy eagle" was photographed about two weeks ago from the hide to Smøla Naturopplevelser. Experiences like this make chasing my dream well worth every minute of the effort!
-EG-
Lagt inn av Eirik Grønningsæter / WildNature.no kl. 20:57 2 comments:

So it happened again – a serious oil spill along the Norwegian coast. Last night - a cargo boat, in nice and calm weather, hit shallow water and parked itself on a skerry. It seems that about 500 tonnes of bunker oil might pollute our ocean. This accident happend in Southern Norway in the outer part of Oslo fjord, and basically in Norway’s only marine national park!


Despite this, I need to admit that, when the accident anyway needs to happen, the Oslofjord area is probably the best place for it since this area is realtively poor in nature quality and especially of relatively low importance to birds compared to the rest of Norway. It is however, extremely important as a recreational area, as this part of Norway is densely populated and has several of Norway’s larges cities close by. However, I was anyway shocked to listen to the news last night when the responsible authorities for minimizing damage (Kystverket) in an interview says that we can’t begin damage minimizing activities because it’s dark and we can’t see the distribution of oil on the sea yet. In other words, in ideal conditions for a clean up, with dead calm weather (only 7m/s wind from NE according weather forecasting service Yr.no) our equipment is not good enough to start minimizing damage because it is dark!?

Everybody seems to be happy with the northerly wind direction and that the serious oil spill drifts southwards away from our coast. This might be good for beach loving tourists and hut owners in the area, but not necessarily for nature. The largest concentration of birds in this part of Norway are pelagic species, and if worse comes to worst – the oil spill might even reach the shores of Denmark where huge amounts of seabirds flocking at this time of the year. The potential damage is enormous. I guess Norwegian authoroties once again prove that nature is not important, but rather that things are ok if they look nice from the outside.

I was perfectly aware that Norwegian oil rescue facilities was in a horribly bad shape, but this is more than worrying for several reasons. At the moment, there is a poilitical fight if Norway should or shouldn’t start oil searching activities in the Lofoten area – on the edge to the Barent’s sea and one of the most bird and fish rich areas in the world. Several threathened species have their core breeding sites in this area. This is the coast of Northern Norway where you barely have a day without gale force winds, and for several months of the year have no light because of its northern latitude! In other words, if an oilspill happens here, our autorities have now admitted that we have absolutely nothing to help minimizing the damage.

Norway wants to make enormous amounts of money on oil – but not spend ”pocket money” to assure that we can cope with an accident if it happens. In my mind, this is reason more than good to ban all oil activities in nature rich areas such as the Barent’s sea as we never know when shit happens! 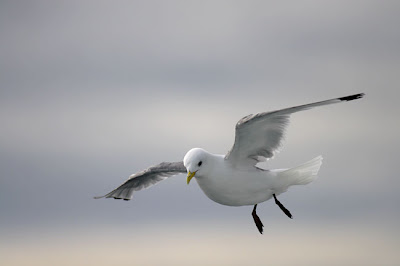 The black-legged kittiwake (Krykkje) is normally one of the seabird species that get hit badly in oil spills. The species has shown a heavy decline the last decade all over its distribution areas.